Digging in to Earthdog 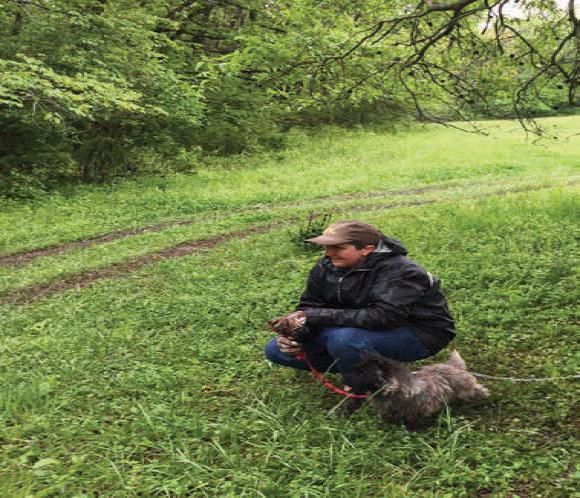 GCh Ch KinLoch David Douglas of the Isles, the most-titled earthdog in history with an Endurance Earthdog 12 title, waits his turn for a Master run with handler/trainer Ryan Westlund.

Earthdog is the sport that most closely matches what our beloved Cairns were bred for—to go to ground and engage with quarry. Unfortunately, it is a perfor-mance sport with a steep learning curve— fewer dogs pass the lower levels than the higher levels! This means that a solid foundation and persistence are important to getting involved (and staying involved) with your Cairn in earthdog.

The AKC regulates earthdog trials, so all registered Cairns and Purebred Alternate Listing- Cairns are eligible to compete. Earthdog is a noncompetitive performance sport, meaning there are no placements—every dog passes or fails the test on their own merits.

Earthdog is typically a seasonal sport in the rainy Pacific Northwest. We don’t play it in the winter. In hot areas, tests generally aren’t held in the summer months but can be found through the winter and spring. Look up earthdog tests in your area on the AKC events calendar to get an idea what is around you.

Many earthdog clubs offer some type of practice, either in conjunction with their tests or perhaps the weekend before. Sometimes these practices aren’t widely advertised, but most clubs enjoy new people and new dogs and sending an email asking if they will have a practice before their test is a good way to go. For clubs that put their tunnels in the ground for each test, they often have a “dig-in” day the weekend before a test and allow those who help with the dig-in to practice. 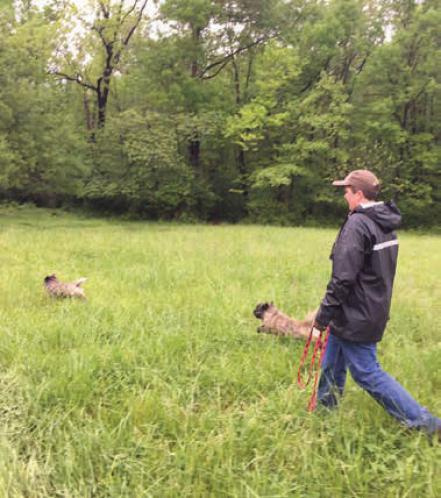 Because of the steep learning curve of earthdog, the AKC created the first level class, “Introduction to Quarry” (or “Intro” for short) to be an optional, non-titling class that allows training. Dogs are still marked as a pass or no pass in this class, but no titles are earned, and success in this class should be judged far more by the work a dog is able to do than by whether they do it in the timeline the AKC requires for a pass. In fact, many of my own upper-level earthdogs got to the top having never once passed an Intro class!

Whether your Cairn’s introduction to the sport is in a practice session or during an Intro class, there are a few guidelines to follow. First, and most importantly, DON’T DO THE WORK FOR YOUR DOG!! Doing the work “for” the dog looks several ways. The most common is that people try to force their dog down into the tunnel. With a 9" by 9" wooden-framed tunnel, we’re not going to have a lot of success folding a Cairn’s legs up and mashing it down there—we might get the dog in, but the dog isn’t going to stay in. The second, most common way we do the dog’s work for them is by becoming more excited than the dog is about the rat. If we know where the rat is and we are barking at it, why would the dog need to help us? Let the DOG do the work.

The best way to spark a Cairn’s interest in hunting at an earthdog test is to support their curiosity, encourage their bravery, stay out of their way and give them time and repeated exposures. There is no one way or even best way to accomplish this—it takes the eyes-on wisdom of an experi-enced earthdog handler. So reach out to your local club and find a practice session or an upcoming test with an Intro class offered, get your things together and head out there!

Things to take to your first earthdog practice or test mostly involve being prepared for the weather since tests are always outdoors. Typically at earthdog test cars are parked close by in secure areas (since they are usually held on private prop-erty) so crating from cars is the norm. At some venues, quiet dogs may be crated in the area of the test secretary. Bring shade clothes, fans, water and whatever else you use to keep your dog cool in the car. You can offer your Cairn water right up until before his or her run, and again immediately after, so bring a bottle and a dish to carry up to the test area with you. Bring cooling items for the human team member as well—cool clothes, ice, drinking water, hats and sunglasses, etc. In the case of possible wet weather, bring warm items for the handler (remember, our Cairns are far more cold-tolerant than we are—the Dachshunds at the test may make fun of them if they show up in flannel coats!) and de-mudding items for the Cairns! You can never have enough towels at a rainy earthdog test. Knee pads, such as for gardening, are a nice touch for the handler as well.

The dog will run the test naked and will need to be brought into the test area on any standard collar or harness (such as allowable in obedience or agility—no “training” equipment such as pinch collars and no flexi leads).

Most earthdog tests allow day-of entries and they rarely fill up (unless part of a club’s National Specialty). Many earth-dog tests include a BBQ or a potluck lunch and some clubs hold a raffle as an additional fundraiser. Clubs may hold two earthdog tests on the same day, so many weekends hold two tests on Saturday and one on Sunday—although it’s becom-ing more common for clubs to hold two tests on Sunday as well. Check the premium list for these details so you can be part of the activities of the day.

Earthdog is an exciting sport for our Cairns that allows them to get in touch with their heritage and gives their handlers a nice social outdoor activity to do. The learning curve can be steep, but once a dog catches on to the game, they tend to move up the levels quickly. In the northwest, Cairns are one of the most popular earthdog breeds and it is a Cairn Terrier that holds the all-time, all-breed record title—Endur-ance Earthdog 12 (EE12). Even though he spent a year at the Junior level before moving up into the advanced classes, so be sure to give your young dogs plenty of time to catch on and see where they will take you!