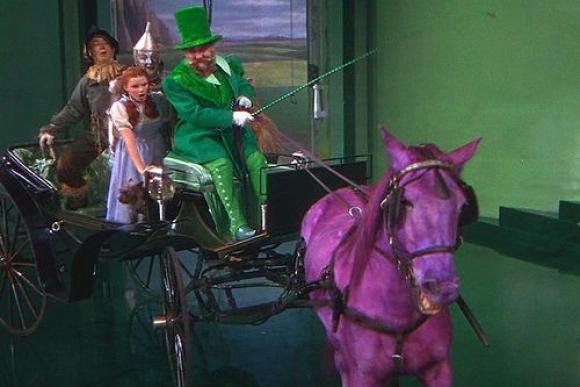 The famous horse of a different color (Source: Public domain)

Ask anyone what colors Cairn Terriers can be and the fast answer is “Anything but white.” That description was the easy way to separate Cairns from Westies who can only be white. But every Cairn person knows the difficulty of explaining the colors of their dogs, especially to a potential pet owner that “only” wants a certain color. The colors of Cairns are complex. There are no guarantees of color in litters or that the color of any particular dog will not change during its lifetime.

Starting out – What color is this puppy?

All puppies are a delight and everyone wants to know “What color are they?” right after asking how many boys and girls. Complicating the question of color is the puppy’s appearance at birth and the presence of puppy coat (AKA “puppy fuzz”), a particular feature in Cairn Terriers. This coat is a growth of long, silky, black hair, frequently with gold tipped ends, that may appear at birth or soon after. Cairn puppies appear darkish due to the puppy coat and may be difficult to identify as to their adult colors. The puppy coat will “loosen” and may be able to be pulled somewhere between 4-6 months of age, depending on the individual dog. Once the puppy coat is stripped, the colors of the adult undercoat and outer coat will be more obvious. One technique to guess adult color under a puppy coat is to fold back the hair on the neck behind the ear. The shorter adult coat will be visible under the longer hairs of puppy coat, allowing a coat color to be guessed.

What colors are Cairns supposed to be if not white?

None of the Cairn breed standards define the terms used for color. The assumption is that everyone agrees on what the colors are. Per the AKC glossary, “wheaten” is defined as a pale yellow or fawn (yellowish-red) that resembles the color of wheat. “Cream” is a light-to-medium yellow, often with just a little more color than white. The term “brindling” is defined by the AKC as a marking pattern usually in conjunction with another color. Layering of black hairs in regions of lighter color produces a tiger-striped effect. Cairns are commonly brindled to some degree despite primary coloration. Other than the puppy coat with its gold tipped black hairs, the “sable” pattern (coat color produced by black-tipped hairs on a background of silver, gold, gray, fawn, or brown) is not correctly found in Cairns.

Per the CTCA breed standard, a Cairn Terrier may be any color except white, with dark ears, muzzle and tail tip desirable. A specified fault is white on chest, feet or other parts of the body.

The UK Illustrated Standard states that a Cairn’s color may be cream, wheaten, red, grey or nearly black. Brindling in all these colors is acceptable. Dark points, such as ears and muzzle, are very typical. This standard specifies that a Cairn may not be solid black, white or black and tan. For Cairn fanciers unfamiliar with the term “black and tan,” this is used in a number of dog breeds to describe any black dog with tan markings above the eyes and on the muzzle, chest, legs, feet, and breech. This pattern is more specific to certain terrier breeds originating from the ancestral Black and Tan Terrier in England, whose descendants are the Welsh, Lakeland and Patterdale Terriers. Finding this coloration or evidence of a “saddle” over the jacket would be an indication that the dog contains non-Cairn ancestors. Cairns may brindle but should never saddle.

The Cairn coat comprises a harsh weather-resistant outer coat and a softer thick undercoat. Both can be described with their own colors and may not match. One beautiful girl I was fortunate to own was declared a red brindle at registration. In full maturity her outer coat turned silver-black but she retained a bright red undercoat that dazzled when the long hair was parted.

The blackness of the mask and points (ears and tip of tail) also will fade with age, particularly in cream, wheaten and red Cairns with the coat taking on a duskier version of the main body color. A dramatically solid coal-black mask in these dogs may be a sign of color enhancement by the groomer and should be discouraged.

What color do I put on the registration form?

The AKC will accept 11 standard and 4 alternate color designations of Cairn Terriers, plus additional specifications for black markings of the muzzle and of the points, either together or separately. With 15 possible color choices and 4 ways to specify markings (that includes to list no markings at all, just giving the primary color), a Cairn might be classified in as many as 60 unique colorations on AKC registrations.

Cairns may be classified as black or as black brindle. Even if called black, a Cairn must never be the solid black found in the Scottish Terrier. An evenly coal-black color in a Cairn is undesirable and should be considered a fault. Some amount of brindling or shading must be present in any black.

So how do I choose what to call the color?

The color listed on a registration form stays with the dog officially and may complicate pedigree records. Should a dog be called a generic “brindle” rather than some other color with brindling? How pale is a wheaten before you call it a cream? How reddish a wheaten before you call it red? What if the red does not have obvious brindle striping? And will that dog turn black over time? I had a prospective puppy buyer once tell me he only wanted a light wheaten puppy and wanted a guarantee it would never turn darker. I told him he did not really want a Cairn and suggested he find a Westie breeder instead.

If I breed two Cairns, what colors might I get?

Studying 4-5 generation pedigrees is valuable in planning any breeding. Looking at the declared colors in the ancestors may give a hint about what genes are potentially in play. While no scientific studies have defined Cairn color genetics, it appears that brindling is dominant genetically. However, even with research and planning, every puppy is a separate roll of the genetic dice. The colors within any litter are subject to probability and chance. Knowing that certain colors are in a specific blood line may explain surprise colors in the offspring. I have personally produced several golden cream and wheaten Cairns without any brindling in breedings between red brindle/red brindle or red brindle/black brindle parents. Studying pedigrees and knowing your blood lines may only let you know what is possible. Because in any breeding, you never know what you’re going to get!

Cairn Terrier colors and markings officially recognized by the AKC 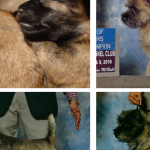 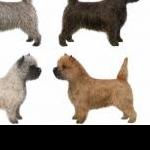 This article is reprinted for educational purposes only. The information is the opinion of the author and does not reflect an official opinion from the Cairn Terrier Club of America.